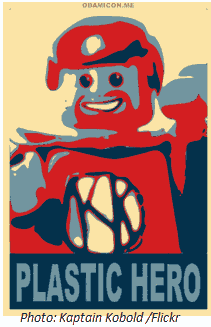 Im last article it was about currently very controversial issues of algae use. Today's topic is also concerned with a topic that generates very different opinions, but does not come from the field of energetic, but material use of biomass. I would like to talk about the pros and cons of using plastic on the occasion of the current film "Plastic Planet" by Werner Boats in German cinemas. A topic that divides minds.

When one thinks of the types of biomass use, the plastic material does not (first) come to mind first. But the plastics and biomass industry could mature into strong partners in the field of bioplastics in the next few years (Link to another article).

The film "Plastic Planet" is a rather critical film from a connoisseur of the industry and mainly illuminates the dark sides of the plastic age from different perspectives. Opinions about the film, as with the subject of plastics itself, differ widely and range from criticism of the use of unscientific studies to acknowledgments about the prophetic power and social relevance of the film. If there is any truth, then it is probably somewhere in between.

I liked the film a lot and inevitably thought of Al Gore's film about climate change, "An Inconvenient Truth". In a relatively private and personable way, Mr.Boots presents another uncomfortable truth about the effects of our global actions. In my opinion, the film is rarely moralizing, but it puts your finger in an open wound that is difficult to ignore as part of a society flooded with plastic.

On his global journey to the problematic aspects of our “Plastic Planet”, health and disposal problems in particular play a central role. Despite the very serious subject, the film is entertaining and one leaves the cinema with a heightened awareness of the plastic problem.

The link to the film's official and very informative website with a suitable plastic design Is there ... here.

List of the social advantages and disadvantages of plastics

As with all successful technologies, the use of plastic, viewed across the entire value chain, has various issues that must be criticized. Here is a list of advantages and disadvantages that occur when using plastic:

These points summarize the essential points about the pros and cons of plastic usage.

A lot has happened in the EU in recent years, particularly with regard to the health risks of plastics. The EU regulation REACH has been in effect since June 2007, which regulates the use of chemicals within the EU countries. According to this, only substances that have been previously registered and evaluated may be used. This also applies to chemical substances that are necessary in plastics processing.

When I think of plastics, I also have mixed feelings. On the one hand, I have the pictures of carpets made of plastic waste floating on (in) the sea and the use of problematic solvents in my head. On the other hand, there is also the idea of ​​one of the most flexible materials in terms of formability, durability, weight and cost, which could solve many social problems in medicine, communication or mobility.

The sudden damnation of an entire industry is as irrational to me as the one-sided hype. Both carry too much revolution and too little evolution. I think it is more sensible to learn from mistakes that have been made and to build on existing ones than to replace an entire industry in a snap. At this point, I think environmental improvements in production processes and innovative recycling concepts are more sustainable.

The special thing about bioplastics is that they can help to overcome a large part of the points of criticism (raw materials, production, disposal) and to strengthen the advantages of using plastic in the overall balance. I therefore consider it very important to differentiate between fossil plastics and bioplastics. Because the material plastics and the plastics industry as a whole are of course constantly developing, also supported by films such as “Plastic Planet”.

In the case of biopolymers, however, a distinction should also be made between plastics that are created exclusively on the basis of renewable raw materials and those that are also biodegradable. There are plastics that are bioplastics, but are not necessarily biodegradable. According to some bioplastic manufacturers, the ecological pioneers among the bioplastics are the types that can be completely biodegraded within 180 days without leaving behind any hazardous chemicals. You can see what natural fiber plastics (NFK) can do in this film the agency for renewable raw materials.

The weaknesses of bioplastics are currently primarily in the economic area, since they are more expensive than their fossil counterparts. Some statements about that Competitiveness of bioplastic against fossils I received from a process engineer in the plastics industry at the Green Week.

Replacing 50% of fossil plastics with bioplastics from algae

With bioplastics, the question of raw material sources and increasing competition for renewable raw materials is also important. The US company Cereplast recently expressed this opinion in a press release that algae-based plastics could be used to replace up to 50% of fossil plastics.

So far, the company has mainly produced the PLA bioplastic from the starch of potatoes, cereals and cassava (tapioca starch), but is so convinced of the results of its own algae research that it is aiming to develop an algae-based bioplastic in the coming months. This again shows the diverse uses of algae (see article Algae biofuel), which are therefore suitable for both energetic and material use.

What is your opinion on film or on “plastic” in general - should we part with plastic in the medium term and look for alternatives or should we modernize?

Discuss with us! Thank you.