Use of bioenergy is based on the cultivation of renewable raw materials or the use of waste materials Leftovers, Slurry or straw. For the production of gaseous and liquid bioenergy, the NawaRo's So far mainly classic annual crops such as rapeseed, maize, rye or wheat have been used. Especially when choosing energy crops, there is also an increasing search for alternatives. Current studies show that the perennial plants also offer good conditions for the energetic use of biomass. Therefore, the potential of the perennial energy crops should be examined in more detail in today's article.

Humans have been practicing agriculture for around 10.000 years to secure their food base. By adopting and developing the Agriculture we were able to emancipate ourselves from the nomadic way of life as hunters and gatherers and found permanent settlements. Focused on the positive developments, we owe a great deal to agriculture.

It should not be forgotten that the most important food crops such as barley, maize, rice or wheat are all annual. As a result, farmers on all continents are used to a one-year cultivation rhythm and are increasingly fine-tuning the individual cultivation steps (seedbed preparation, sowing, fertilization, crop protection, harvesting) in order to improve yields and less with the basic cultivation system. Concentrating on perennial plants is therefore almost a small revolution. On the basis of which arguments could this reorientation still be useful?

Botanists distinguish between perennial plants that live for at least 2 years, but only bloom once and then die (hapaxanthens), and those perennials that bloom and bear fruit year after year. The latter are also known as perennials and are increasingly in the interest of economic use. I would like to take a closer look at the perennials.

Here are some examples of perennial plants, which as Energy plant in discussion with high potential are:

Persistent plants show different peculiarities compared to the annual plants. The multiplication of the perennial plants takes place mainly in a vegetative way and is less concentrated on the sexual reproduction.

In addition, the perennial plants increasingly form bulbs and bulbs, which they use to store nutrients and thus enable wintering.

The seeds are comparatively large and support the rapid development of the cotyledons after germination. The number of seeds produced is also lower than that of annual plants, since the pressure to spread within a season is not so great for perennials.

Below is a list of some of the benefits of perennials. As usual, exceptions confirm the rule and none of the advantages is present in every perennial plant or in any annual plant. 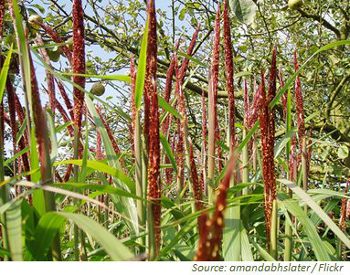 Where there is light, there is usually also shade. So the perennial plants still show various disadvantages when compared to the tried and tested annual crops. Here is an overview:

The advantages and disadvantages of individual cultures should be carefully weighed before breaking new ground. In any case, perennial plants will bring a breath of fresh air into the previous cultivation systems for energy crops and give this modern branch of agriculture more flexibility and hopefully more color to the fields. Furthermore, because of their often very high cellulose content, these “next generation energy crops” are particularly good for energy products such as Next generation biofuels suitable (e.g. cellulose-ethanol).

Finally, I would like to mention another important group of innovative energy crops. However, this is not found on land or in classic agriculture, but in the water or in specially built ponds in the country. Of course there is talk of Micro and macro algae, which will also provide new forms of bioenergy generation in the future.