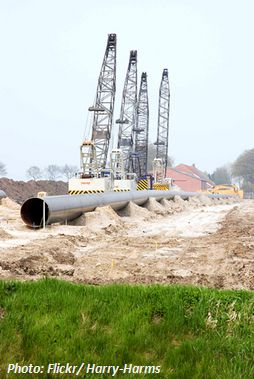 What do you do as a business-minded manufacturer of a product if the place of production and the place of use are not the same? As a rule, you will look for cheap ways to transport your goods to places where there is the highest possible demand for them and a good price can be achieved. And what does that mean for the sale of biogas? That you sell it to a place where both the electricity and the heat potentials can be used optimally.

Biogas processed into biomethane offers the possibility that it can be transported on the one hand without major energy losses and that it can also be used to feed back into an existing infrastructure by feeding it into the natural gas network. In order to get seamless access to the network, three technical things have to be implemented:

An experienced planning team is not faced with any unsolvable tasks due to these necessary steps and the framework conditions of the process are regulated by the gas network access regulation. So in theory there are no major problems. But as you know, the devil is in the details, and unfortunately biomethane feed-in isn't that easy.

Conflicts with the grid connection contract for biomethane

I read a good example of the existing potential for conflict in practice in the current issue of the “Neue Energie” magazine. This is reported by the farmer Horst Silk from Lüchow Dannenberg, who had major problems with the network operator Eon Avacon during the implementation of the grid connection and the subsequent feed-in of his biomethane.

The main point of dispute in this case was the nature of the network connection contract that existed between the two parties. According to Eon Avacon GmbH, the water content of the processed biogas did not correspond to the properties of the natural gas already flowing in the pipeline or was not compatible with it, which led to acceptance problems for the biomethane supplied.

Finally, the conflicts could only be resolved in court by the Federal Network Agency, whereby Mr. Seide was right in the judgment regarding the technical questions and the existing network connection contract had to be adapted.

Conclusion on the problems with feeding biomethane into the grid

There is much to speculate about the deeper background to this conflict, starting with simple misunderstandings in the implementation and communication, to existing different business interests and incompatible ideologies of the contracting parties. However, I do not believe in the primarily keeping biogas technology small by the natural gas industry and the network operators.

There will certainly be cases in which employees in the natural gas industry fear the biogas industry as a future competitor, which could take market shares away from natural gas. On the other hand, both sectors ultimately have similar roots with their focus on the energy source gas, which makes a medium-term partnership in selected areas, mainly technologically and politically, more obvious.

Economic competitions between companies in the two industries are necessary, but irrational conspiracy theories between fossil and renewable energy sources are imaginative, but not very helpful in my opinion. And that when implementing contracts with a precedent character, as in the present case between the farmer Silk and the network operator Eon Avacon, both contracting parties want to protect themselves as much as possible in order not to be confronted with risks that could endanger the existing business, I believe reasonable.

In any case, I congratulate both parties on their pioneering work in the field of biomethane feed-in and hope that a lot has been learned from this case in the future. I can also imagine that a well-developed renewable gas feed-in law could benefit everyone involved.

Another article on opportunities and barriers to biomethane feed-in you'll find here.