Visionary concepts stimulate the imagination and help shape the future in a few decades. One of these big ideas in the energy industry is certainly the generation of energy through nuclear fusion, which an international research network in Cadarache (France) is working on. A visionary thought that can be integrated directly into current economic events is rare! Verbio AG has succeeded in combining two successfully implemented ideas that lead to a leap in efficiency in the production of bioenergy - and on an industrial scale!

When I saw Verbio AG's large advertising poster on Friedrichstrasse (in Berlin) for the first time, I was pleasantly surprised, but at the beginning I was also a bit irritated. The presumed goal of the poster was definitely achieved for me. The inscription reads:

“In 2013, VERBIO will replace the first nuclear power plant with bio natural gas. Dear Federal Government, dear opposition, this is just the beginning. Discuss with us at www.energiezukunft2013.de "

A confident and personable offensive way that has emerged from the biofuels industry in the past difficult years (see article) was rarely heard. What are the solid arguments for such an announcement?

Biogas instead of animal feed improves the ecological balance of bioethanol

The key lies in a significant change in the use of biomass in the production of Verbio AG's most important product - biofuels.

So far, biodiesel has been produced and sold in Bitterfeld and Schwedt, and bioethanol in Schwedt, Wismar and Zörbig. In Zörbig, 270.000 tons of bioethanol were obtained from the strength of 100.000 tons of rye. The rest of the biomass was left energy-intensive processed into dry animal feed. The savings in carbon dioxide in the overall process were a maximum of 50% compared to classic fuels. According to the BioStV and BiokraftV, the CO2 savings from the use of biomass must be at least 2011% from January 35 (50% in 2017 and 60% from 2018) if she wants to receive the subsidies according to the EEG (see article on certification of biomass).

In order to further improve the ecological balance of biofuel production, the manufacturing process was therefore changed. The stillage remaining in the production of bioethanol is no longer processed into animal feed, but is passed on to 9000 cubic meter and 20 meter high fermenters and with the help of liquid fermentation biogas converted. The 6 fermenter biogas plant in Zörbig with its 30 MW even exceeds the performance of the large biogas parks in Mecklenburg-Western Pomerania, which consist of 40 modules with 500 kW each and produce a total of 20 MW (see article on plant splitting in Güstrow and Penkun).

Performance parameters of the bioethanol sites in Zörbig and Schwedt

The following overview shows some key figures of the Verbio AG locations where the new concept was or will be implemented. 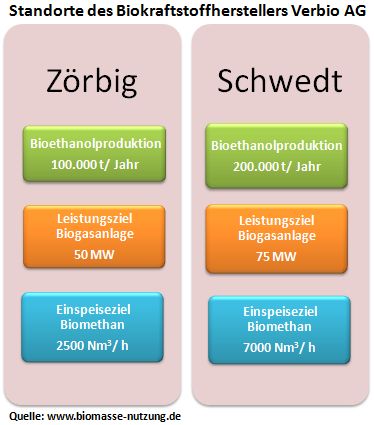 With the help of an innovative concept and the courage to invest, Verbio AG has succeeded in setting up a comparatively revolutionary concept and putting it into operation. To improve the energy and nutrient balance, biogas and fertilizer are produced instead of dry feed. In addition, the classic bioenergy concepts are linked in an industrial style and the production of biogas and biofuels flow into one another.

There is more information on process engineering in the article “Refined Concept” by Karsten Wiedemann and Axel Schmidt in the September issue of the specialist magazine “Neue Energie”. More articles on biofuels here.