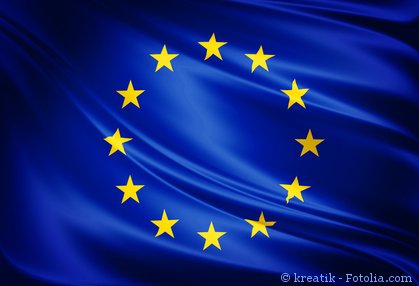 How was the proposal made? EU Department "Climate Policy" to reformulate the biofuel targets for 2020 in Germany? Some of the media's reactions and the published opinions of the bioenergy industry are presented in this article. Finally, there is a small summary of the possible effects for the further expansion of the hope-bearing bioenergy should the proposal be implemented.

Biofuel targets and the consideration of the "ILUC factor"

There are 33 departments, or Directorate General (DGs), which are subordinate to the EU Commission. Of all DGs, one recently, DG Climate Change, submitted the proposal to adjust the biofuel quota for 2020. If the EU Commission implements the proposal to change the biofuel targets, the EU27 would only be allowed to use 5 percent of first-generation biofuels in order to meet the remaining target of 10 percent of renewable fuels by 2020. The remaining 5 percent would have to be provided from biofuels that were produced from waste, agricultural residues or algae and thus to the Next generation biofuels belong ("Advanced biofuels").

That could now be the Brussels decision on how Europe deals with the issue ILUC and biofuels will handle. The decision on indirect land use changes has been long awaited. For some years now, the EU Commission has been torturing itself with a final decision on the design of the "ILUC factor". She has now decided on a way to take into account the latest calculations on the carbon footprint of biofuels and to take measures for climate policy. It was also important that the implementation of the IlUC factor did not pose insoluble challenges to the European biofuels industry and that the industry was given opportunities to adapt to the new framework. The current proposal to adjust the biofuel targets can be a successful compromise!

However, it should be noted that the proposed change to the biofuel target is not yet a legislative proposal from the EU Commission. It is also not clear how the other departments concerned will react to this proposal and whether it will find broad consensus. However, a few days ago, the energy department expressed its approval through a statement by Günther Oettinger. 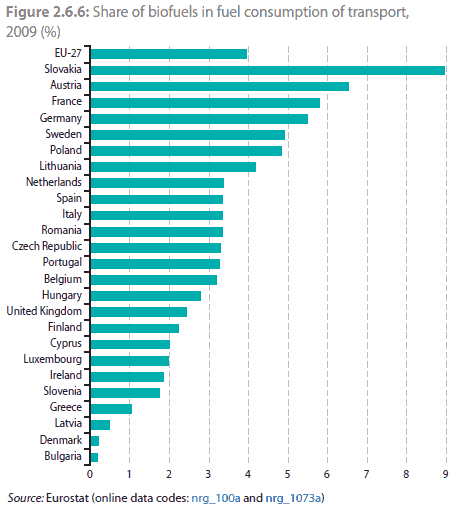 Graphic shows the latest figures (Eurostat, 2009) on biofuel consumption in the EU27.

But what reactions has this message triggered about a possible change to the Renewable Energy Directive? Let's start with some articles and statements in the German and international media.

Article on the change of the biofuel targets in the FAZ: "EU lowers the target for biofuels"

An article by Henrik Kafsack and Jan Hauser on the proposal of the EU department and on the current biofuels debate. Both the arguments ILUC, the tank-or-plate debate, and the E10 stop suggestion Development Minister Dirk Niebel finds space in the article, but without one-sidedly condemning the biofuels and presenting them as a scapegoat for suffering on earth.

Article on the adaptation of the biofuel targets in southern Germany: "End of biofuel funding | Nonsense that grows in fields"

An unusually weak article on the biofuels debate in the Süddeutsche Zeitung. The article produces salvo-like one-sided claims and presents them as facts. In addition, in the article by Silvia Liebrich generalized almost all extreme cases of the biofuels landscape to the entire industry. One of these articles, which is particularly tiring to read for bioenergy enthusiasts. The last article of this kind was the Spiegel-Online article on bioenergy by Jan Fleischauer. In the article by Ms. Liebrich you can also read that she is a strong advocate of solar technology and e-mobility and that bioenergy is probably primarily a competitor. Sad - when you consider that there are also ideas for the closer Cooperation between bioenergy and solar energy gives.

Very harsh criticism of bioenergy is also important, but it should at least be substantiated and have a certain degree of factual fairness. The consequences of this Play off the renewable energy sources against each other only helps us to a limited extent in the common management of the promising and necessary energy transition.

As an excuse for Ms. Liebrich, I have to admit that from time to time I also write articles in which I am somewhat unprofessional about certain developments. In retrospect, I am not very happy with these articles and they are certainly not one of the most constructive things the bioenergy blog has to offer.

The article by Stephanie Bolt and Claudia Ehrenstein at Welt-Online is characterized by the fact that he also has the opinion of the environmental protection association FEDERATION and the dated Alliance 90 / The Greens which supports the proposal to change the biofuel quota. In addition, the fundamental differences between Europe's biofuel strategies (Europe relies on biodiesel) and the USA (USA rely on bioethanol) highlighted. However, I find the interpretation of EU events in the article somewhat anticipatory, since it is only a suggestion! In addition, the article's conclusion on the abolition of subsidies for E10 from 2020 cannot be fully understood.

Article on the Biofuels Digest about Europe's biofuel targets "Did the EU really just abandon biofuels?"

Another very constructive article by Jim Lane, Editor of the world's most read biofuels blog, which takes a comparatively relaxed look at the proposal from the EU department from overseas. The proposal is understood primarily as a refusal to accept grain-based biofuels and as a clear commitment to the next generation of biofuels. In his article, Jim Lane deals primarily with the various effects that the proposal might have on legal force.

The differentiated article from Barbara Lewis and Michele Kambas has only been published 1 week later than the previously mentioned articles and already includes the joint statement of the EU Commissioner for Climate Policy Connie Hedegaard and the Energy Commissioner Günther Oettinger. Both departments are in favor of limiting the use of grain-based biofuels to 5 percent in the EU. The article also includes Oxfam's opinions, which support the limitation of biofuels, and in particular focus on Tank-or-plate debate on biofuels relate. 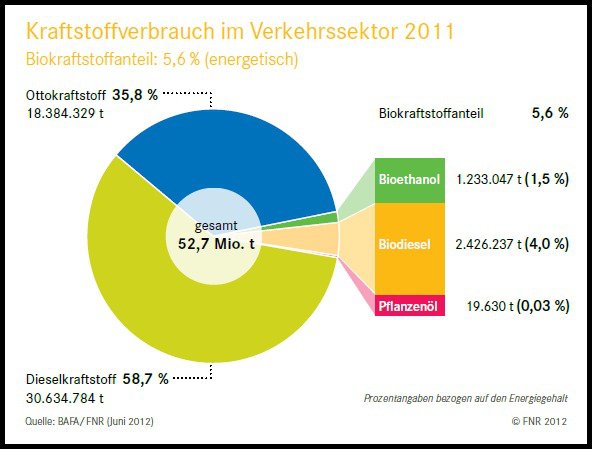 Graphic show the Composition of fuel consumption in Germany for 2011.

Responses to changing biofuel targets from the biofuel industry

How does the biofuel industry in Germany react to the proposed cap for the use of 1st generation biofuels to 5 percent?

VDB statement on the adjustment of the biofuel targets: "EU proposal is a blow to German energy transition"

The Association of the German Biofuel Industry (VDB) finds clear words for the impact of the proposal on the biofuel industry in Germany and Europe. So expresses itself Elmar Bauman, Managing Director of the VDB, as follows:

"The European Commission's proposal for legislation on biofuels, announced today, would be a major setback for the German energy transition in the transport sector"

The disappointment or indignation of the industry association is understandable when you consider how much the industry has been committed to in recent years, above all to improve the ecological sustainability of its products. The sustainability certification for biofuels production, which can set new standards for the entire agricultural production, is hardly picked up by the media.

The Federal Association of the German Bioethanol Industry (BDBe) also sees the proposal as a step backwards for European energy and climate protection policy. The managing director of the BDBe, Dietrich Klein, formulated an alternative course of action that would solve the existing problems more constructively than the previous proposal.

“The German bioethanol industry strictly rejects iLUC values ​​for European biofuels and warns against basing legal changes on the IFPRI report. This cannot be considered as the basis for legal measures. "

In any case, the title of the Verbio press release is a surprising reaction to the initially bleak-sounding proposal from Brussels. But ultimately, the statement is understandable as Verbio would be one of the big winners of such a change. Verbio AG has been relying on the for a number of years Manufacture of biomethane from straw, making it one of the first companies worldwide to be able to produce a second generation biofuel in large quantities. Now maybe the moment will come when the company's early and courageous reorientation will be rewarded.

I can well understand the euphoria of Verbio AG, but in the statement from one of the most modern biofuel manufacturers in Europe, I would have liked a little more support for the entire biofuel industry. Verbio benefits from the proposal and I am also grateful for the company's innovative concepts, but the planned change to the biofuel targets is also an insurmountable challenge for manufacturers who have opted for first-generation biofuels. These have invested millions and could once again be hit by the fickleness of politics. In any case, this proposal does not improve the medium-term security of investment within the biofuels industry.

Conclusion of a bioenergy enthusiast on changing the EU biofuel targets

Relying more heavily on second-generation biofuels is certainly a courageous step by Europe that can catapult the European biofuels industry into a new era. The continuous improvement of biofuels and the biofuel targets should be a high priority and the departure from plants that can also be used for food production finds a broad consensus in society. However, the promotion of these innovative fuel types must then be correspondingly clear (!), Since apart from cellulose ethanol and bio natural gas from waste, these are often still at an early stage of development!

It remains to be feared that the next generation of biofuels will be difficult to reach market maturity without a stronger presence of the first generation. Where in Europe should the necessary capital for the construction of next generation UCS systems come from, if not from established 1st generation manufacturers? After all, it can be doubted that the German state after the Setback with choirs and the wastage of taxpayers perceived in this way will still be heavily used for the next generation of biofuels. And for the construction of plants of this kind, investments are required that are not in the single-digit million range. The formulation of ambitious biofuel targets could therefore be counterproductive.

One also has to ask the question whether the European population also accepts this proposal as a change of direction towards next-generation biofuels (Cellulose ethanol, Algen etc.) understands or whether the implementation of this proposal should not be interpreted as a further rejection of bioenergy as a whole. So far, the public bioenergy debate has not been very differentiated.

As a bioenergy enthusiast, I see the proposal of the EU's climate policy department on the one hand as courageous and very research-oriented. And Europe should be innovative! However, on the other hand, I also think the proposal is not very helpful in order to advance climate protection in the transport sector in a timely manner or to support the weaning of Europe from the oil that is increasingly in demand worldwide. Therefore, the consequence of changing the biofuel targets is likely to make us slow down in both areas. From a technical point of view, too, I consider the proposed time frame, 5 percent next generation biofuels by 2020, to be quite problematic / too ambitious given the current production capacities in Europe.

What do you think about biofuels and the proposals to change the EU's biofuel targets? Do you support stepping on the accelerator when demanding improved biofuels? Would you change your mind about the use of bioenergy in Europe in general if it is next generation bioenergy?