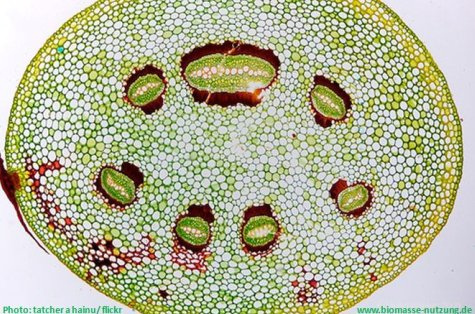 What I find particularly fascinating about bioenergy, or the energetic use of renewable raw materials, is its diversity. There are numerous industries that are touched by them and new ideas are constantly emerging and with high social relevance. The basis is agriculture and forestry with the associated land use systems and ways of life, on which the manufacturing industries of energy and materials management can build. In addition, a broad spectrum of sciences contributes to the further development of regenerative bioenergy. A current scientific approach from the field of biochemistry Biotechnology and its importance for biofuels will be presented in the following article.

Enzymes as the key to bioenergy

A research project at the University of Berkeley (USA, California) deals with the study of cellulase (enzyme). The results were recently published in an article in the journal "Biotechnology and Bioengineering".

The enzyme plays a central role in the breakdown of biomass and a better understanding of cellulase is essential for the further development of next-generation biofuels (see article) very interesting. The researchers are studying how cellulase works in the hydrolysis of cellulose into its simple sugars. So far, the processes that take place on the plant cell wall are still largely a "black box" for scientists and are only understood in the basics.

The research group at Berkeley University has therefore developed a model that describes the hydrolysis and the processes taking place in more detail. By dividing the hydrolysis into 3 phases (adsorption, complex formation, reaction), the systematic observation and quantification of the individual processes is facilitated and the fog is increasingly cleared.

The model can be used to speak more precisely about hydrolysis, with the aim of optimizing the splitting of biomass and the production of biofuels. A type of bioethanol is then made from the sugar of cellulose (Link to an article on cellulose ethanol), which was not only obtained regeneratively, but also learned from the moral criticisms of the past.

You can see how cellulose ethanol can be produced in this film.

The special thing about cellulase is that it does not occur in the human organism, which means that cellulose cannot be broken down by the human digestive tract and is out of the question as a source of food for humans. This property in the selection of the biomass used is one of the improvement approaches of the second generation biofuels, which by the Tank-or-plate discussion was stimulated. A list of 2nd generation biofuels Is there ... here.

I would also like to point out an earlier one Articles in which I reported on another possibility how scientists try to influence the stubborn cell wall components of plants (lignin and cellulose) with the help of enzyme technology.

Perhaps a biochemist or doctoral student can say more about the potential of this research approach.

Discuss with us! Thank you.