According to the EuroObserv'ER barometer published in November, the Energy generation from solid biomass in Europe increased by 8% between 2009 and 2010. But at what level is it Use of bioenergy with our European partners and is there an intensive collaboration between them? The final conference on the COACH BioEnergy project offered an interesting insight into the state of bioenergy in selected countries in Eastern and Central Europe. An insightful perspective that shows the different dynamics and presence with which bioenergy is incorporated into one's own energy transition. I have visited the bioenergy conference and would like to report on it.

A diverse bioenergy for a diverse Europe

The commitment of the English to make a major contribution to the strengthening of bioenergy was already mentioned in the Article on the Renewable Heat Incentive (RHI) received. The recent commissioning of the world's largest biomass cogeneration plant (750 MW!) On the largest island in Europe also speaks a clear language.

Also the transnational that started in September EnAlgae research project, which examines the production of bioenergy from algae, has its focus on 7 countries in northwestern Europe.

The COACH BioEnergy project, on the other hand, focuses primarily on the countries of Central and Eastern Europe and contributes to the further development of bioenergy on site.

Each country shows particular strengths with regard to the use of bioenergy, depending on its own location advantages. Being aware of your own potential for the use of biogas, biofuels or solid biomass is facilitated and accelerated by the exchange and comparison with other countries.

COACH BioEnergy project is part of the Central Europe Program

The COACH BioEnergy project is funded by the European Union and belongs to the "Central Europe" program, Between 2007 and 2013, the Central Europe Program was funded with € 231 million from the European Regional Development Funds (ERDF).

The Fraunhofer Institute MOEZ in Leipzig is responsible for the organization of the EU project, in which 18 institutes, universities and associations from 7 countries take part, under the project management of Annamaria Riemer.

The goal of COACH BioEnergy is the inclusion and research of future-oriented projects and technologies for bioenergy in the partner countries. The knowledge gained about bioenergy is collected via a consulting network and made available free of charge on the project website.

The COACH BioEnergy project covers the following steps in the creation of bioenergy in Europe:

Final conference of the COACH BioEnergy project in Berlin

The COACH Bioenergy final conference took place on December 1st at the Fraunhofer Forum in Berlin. The conference was attended by participants from all partner countries and presented the results of individual countries.

In her presentation, Maud Skäringer from the European Commission gave an interesting insight and outlook into European funding policy. The focus was on the next funding period of the following EU funding instruments:

In numbers, the European Union invested a total of € 9.3 billion in research and promotion of renewable energies between 2007 and 2013. Of this total, 1.8 billion will go to bioenergy.

Ms. Skäringer pointed out that energy is a comparatively new topic that is funded with such huge sums. In order to further expand the global leadership position of the "low carbon economy" in Europe, 40% more money (about € 17 billion) will probably be invested in the coming funding period.

A special moment at the COACH BioEnergy final conference for me was the lecture by Helmut Lamp, CEO of the Federal Association of Bioenergy (BBE), As a bioenergy enthusiast, I was very excited about my first live appearance by the BBE representative. Afterwards I even had the pleasure of getting to know Mr. Lamp personally.

You can still see Mr. Lamp's passion for the controversial bioenergy industry even after 13 years of BBE experience. In doing so, he manages to bring the world of bioenergy to life in an exciting way.

His lecture was a successful mixture of interpretation of current bioenergy developments and a historical report. In his presentation, he very clearly combined the effects of the EEG amendment 2012 with the broad context of the energy transition.

In his lecture, Mr. Lamp showed courage to make predictions and a desire for vision. With his entertaining way of lecturing, he addressed both conflicts and obstacles in the bioenergy framework without missing the opportunity to point out to the specialist audience in a differentiated, humorous and motivating way the great potential of bioenergy.

Enough personal eulogy for Mr. Lamp's bioenergy lecture and back to some statements of his presentation at the COACH BioEnergy final conference.

The biofuel quota could be increased from the current status to 10% with the existing production capacity, the existing filling station infrastructure and the current fleet in Germany. And this value can be achieved by 2013 or even 2012. Biofuels (biodiesel, bioethanol) currently have a share of 6.25 % in the fuel market in Germany.

The sleeping giant for the development of bioenergy and the saving of greenhouse gases is the heating sector. This is particularly true under the circumstances that around 160,000 new apartments are built each year, which can be supplied with renewable heat from biomass from the start. Instead, the market for RES heating systems has plummeted by 30% in the past 30 years. At this point, the legal framework (EWärmeG, KWK law etc.) must be changed.

According to Mr. Lamp, as representative of the BBE, the greatest potential of bioenergy lies above all in the heating and fuel market. Wind energy is often even more suitable for generating electricity.

Lamp does not see the countries of South America as the most important EU import countries for biomass, but in the medium term above all the countries east of Europe. The opportunities for balanced partnerships of "give and take" are particularly great. Existing technologies and know-how could be exchanged for raw materials. The ILUC debate on biofuels Mr. Lamp thinks largely absurd, but did not want to go into this event in more detail. 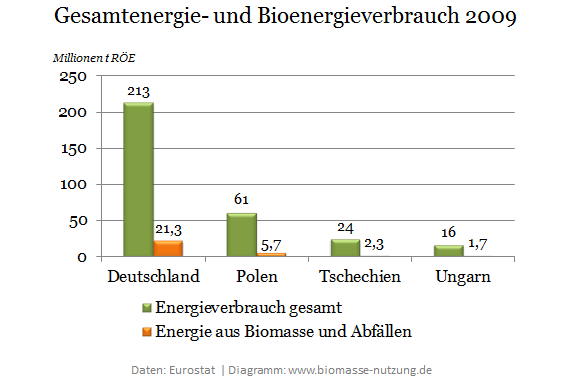 Bioenergy in Central and Eastern Europe

The graphic shows how different the total energy consumption of 4 selected partner countries of the COACH Bioenergy project is. It is interesting that all countries cover about 10 % of their energy requirements through the use of biogenic energy sources and are very similar in the relative importance of bioenergy. A recent UKERC study showed that the Bioenergy even 20 % of global primary energy demand in the medium term can cover.

What are the differences in the composition of gaseous, liquid and solid bioenergy in the countries under review?

The project partners were introduced to the bioenergy situation in their own country in several lectures. The lectures were held in English and I would like to give a little insight into the results presented. The presentations and further information on bioenergy in Germany, Poland, the Czech Republic and Hungary can certainly be requested from the individual speakers.

Bioenergy in Germany at the COACH BioEnergy Project

Christiane Hennig from the German Biomass Research Center (DBFZ) in Leipzig presented the challenges and legal framework of bioenergy in Germany.

Germany has legally set its targets for the generation of electricity (EEG, BioStr-NachV), heat (MAP, EEWärmeG) and fuels (BImSchG) from biomass.

For further questions you can contact Ms. Hennig at the following email address: christiane.hennig

Bioenergy in Poland at the COACH BioEnergy Project

Magdalena Rogulska from the Institute for Fuels and Renewable Energy (IPiEO) in Warsaw presented the state of bioenergy in Poland.

The contents of the EU directive RED 2009/28 / EU still have to be adopted into Polish law to support the further construction of bioenergetic plants. At the end of 2010, 70 biogas plants were in operation in Poland.

According to Ms. Rogulska, about 1.5 million hectares are available in Poland for the targeted cultivation of energy crops. The main importing countries for biomass are still Belarus, Ukraine and Russia.

For more information on bioenergy in Poland, you can contact Ms. Rogulska at the following email address: mrogulska [at] ipieo.pl

Bioenergy in the Czech Republic at the COACH BioEnergy Project

Jan Kolonicny from the Energy Research Center at the Technical University of Ostrava (VSB) reported on bioenergy in the Czech Republic.

Bioenergy is in a great state in the Czech Republic and one almost has to say that biogas, biofuels and solid biomass with an 85% share dominate the market for renewable energies.

The most important bioenergetic raw material in the Czech Republic is wood chips. Innovative raw materials such as waste from the paper and pulp industry (black liquor) are also used.

Gaseous bioenergy was represented in the Czech Republic in 2010 with 150 biogas plants or 25 MW output. New laws for the use of cogeneration and the preparation of Bioerdgas apply from 2013.

Only half of the existing production capacity is currently used for the production of biofuels (biodiesel and bioethanol) and a comparatively low quota of 3.4 % is achieved on the overall fuel market. With a 8.6 % biofuel share, Slovakia currently has the highest biofuel quota in the entire EU.

For more information on bioenergy in the Czech Republic, you can contact Mr. Kolonicny at the following email address:  Jan.Koloničný [at]vsb.cz

Bioenergy in Hungary at the COACH BioEnergy Project

The state of bioenergy in Hungary was presented by Ada Amon from the ENERGIEKLUB Climate Policy and Applied Communications in Budapest.

Accordingly, the future prospects for the energetic use of biomass in Hungary are not as favorable as in the previously presented countries. Currently, bioenergy still has a 74% share (40 PJ) within the renewable energies in Hungary.

The approval of bioenergetic plants is very complex and the authorization of over 30 authorities is only required for the construction of a biogas plant in Hungary. In addition to the overly complex approval procedures, Ms. Amon cited the lack of legal security as the main reason for the faster development of renewable energies in Hungary.

So much for the final conference of the COACH BioEnergy project. Thank you for the interesting event on bioenergy in Central and Eastern Europe to all speakers and organizers.