In the article series on bioeconomy, which is currently running on BiomassMuse, a look at the Origins of the bioeconomy and the Potentials of the bioeconomy thrown. Starting a biomass diet has been presented as a promising way to get a quick but gentle one Withdrawal from petroleum usher in. An uncomfortable period of petroleum fasting, especially for Germany, is becoming an increasingly probable future scenario for raw materials and energy transition to manage something. For this reason, politicians also rely on various programs to actively promote the development of the bioeconomy. In this further article on the bio-based circular economy, we leave the basics behind and take a look at the concrete political measures to support the bioeconomy. 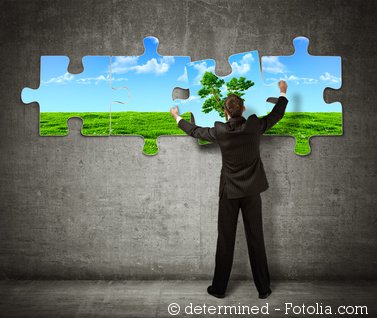 Germany is focusing more on the bioeconomy

In the German Wikipedia the Article on bioeconomy introduced with the following sentence:

"The bioeconomy is the economy of the living, a technical term for the representation of the economic content of living systems."

Wow, if that is not formulated comprehensively! In any case, this definition leaves a lot of scope for different interpretations of the often still unknown concept of Bioeconomy. There should be unanimity that even a society living system is. A deeper study of the Economy of the living is therefore interesting not only from an economic but also from a social (political) perspective.

Let's ask very specifically: What role does the bioeconomy play for federal politics in Germany?

If one agrees in principle to the establishment of a bio-based circular economy, one can gratefully welcome the political measures of the past years. In the past year, the pace of building up the bioeconomy has accelerated, which will certainly please the pioneers of the bioeconomy.

I would like to prove that this is not just the claim of a bioeconomy advocate with a brief review of current political programs.

“With the biomass action plan, bioenergy in Germany is being expanded efficiently and sustainably. We are thus making an important contribution to added value, especially in rural areas, ”Federal Agriculture Minister Ilse Aigner.

The rise of the Bioenergy in the electricity market has already passed the Renewable Energy Sources Act (EEG) started in 2000. The National Biomass Action Plan extends the targeted use of the Bioenergy on the heating market and Fuel market and formulates conditions for the further expansion of bioenergy (Sustainability, Cascade use).

Policy 2: Action plan for the material use of renewable raw materials

The Action plan for the material use of renewable raw materials followed 4 months after the National Biomass Action Plan (08.2009) and supplemented it with the material usage paths for biomass. The 40-page document of the BMELV now officially uses the term bio-based economy and is committed to their construction.

The overview of the Agency for Renewable Resources shows important bio-based raw materials for the material usage paths. V. (Fnr). 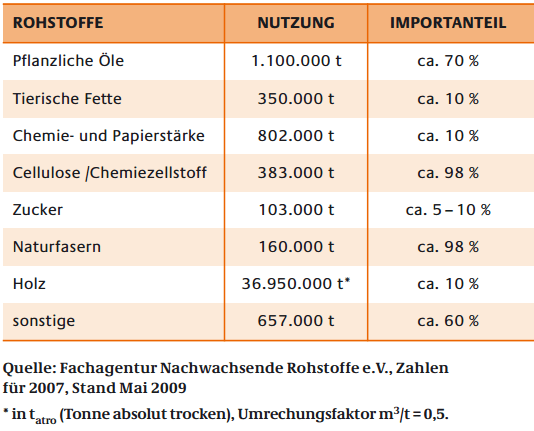 If we now look at the fields of action of the second biomass action plan, an image emerges that gives an idea of ​​the complexity and diversity of the bio-based economy.

If the paths of use for biomass in agriculture, forestry, water and waste management are supplemented by the extraction of food and feed, we have all the raw materials that characterize the colorful recipe of the bioeconomy.

The one created by the BMBF National BioEconomy Research Strategy 2030 was decided on November 10.11.2012th, 5 by the federal government. One of the upcoming articles will report on research on the bioeconomy. At this point only the overview of the XNUMX fields of action of the research strategy mentioned.

The German government plans to invest 2016 billion euros in the development of the bioeconomy through the National Research Strategy by 2.4.

That only passed last month (12.07.2013/XNUMX/XNUMX) Political strategy bioeconomy carries out the synthesis of all biomass usage paths and bundles them under the term bioeconomy. 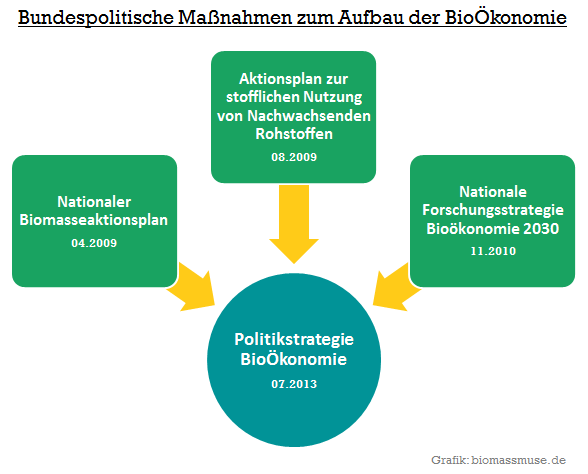 If you like, you can read the bioeconomy policy strategy as an experience report from the previous action plans. An extract outlines the content of the 48-page strategy developed by the BMELV:

The bioeconomy policy strategy sets priorities for advancing towards a knowledge-based bioeconomy and indicates the need for action. The guiding principles, strategic approaches and measures are intended to contribute to utilizing the potential of the bioeconomy in Germany within the framework of sustainable management and help to strengthen the structural change towards a bio-based economy. The strategic approaches must be developed with a view to long-term goals and adapted to new challenges. The success of the strategy will be examined in a progress report.

The following excerpt from the bioeconomy policy strategy summarizes the goals of the strategy:

The BioEconomyRat is a political advisory body actively and supports the federal government in shaping the long-term bioeconomy strategy.

More articles on the bioeconomy in Germany

What is your opinion on the bio-based economy? How long will it take before we have largely completed the energy and raw materials transition?