Hardly any other region in Germany combines the material and energetic use of biomass on such a large scale as Arneburg in Saxony-Anhalt. The plant manufacturer Weltec Biopower complements the region's existing biomass infrastructure with the operation of a biomethane plant. Incidentally, the framework conditions of the bioenergy project on site offer an exciting insight into the history of energy production in Germany.

The heading "The biogas plant starts feeding in biomethane“I would like to read more often and I wish the new system every success.

The Biomethane as an energy source the future belongs: economically, ecologically and technologically. This strong signal also comes from the commissioning of the biomethane refinery in Arneburg. Last but not least, because the entire know-how of the industry is in these plants, the immediate vicinity of a nuclear power plant ruin, which documents an era of conventional energy generation, seems bizarre.

In the Altmark industrial and commercial park there, one of Germany's largest biomethane refineries went into operation after only eight months of construction and has been feeding gas into the public grid since May. The company produces with four 4.900 cubic meter fermenters, six 5.000 cubic meter fermentation residues and a liquid reservoir Biomethane plant operated by the operator Nordmethan from Vechta in Lower Saxony, 1.650 standard cubic meters of bio raw gas per hour on six hectares.

250 cubic meters of the raw material are kept for the heating requirements of the biomethane plant designed by WELTEC BIOPOWER. This produces around 700 standard cubic meters of processed biomethane per hour with a methane content of 99 percent using chemical amine washing, sufficient to supply 5.000 households with electricity and heat. 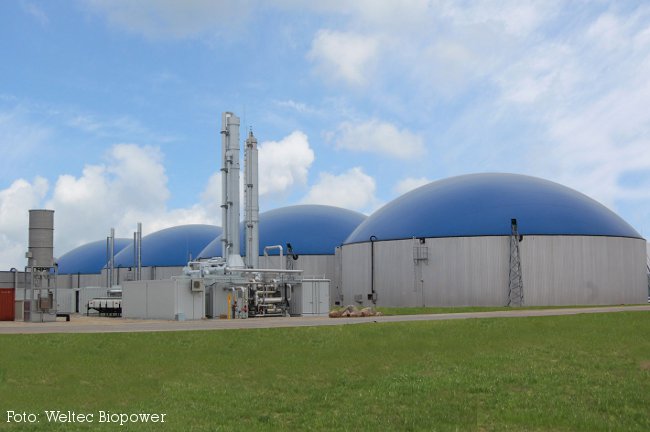 For this purpose, maize silage, whole plant cereals, sugar beets and chicken droppings, chicken manure, liquid manure and water enter the stainless steel fermenters on substrates for this purpose. Overall, the amount of substrate supplied by farmers in the region is over 70.000 tons per year. The location of the plant is attractive and the supply of raw materials is secured because the Altmark is a traditionally agricultural area with a high proportion of grassland. Not least because of this, the historic cultural landscape has been promoted by the Federal Ministry of Food, Agriculture and Consumer Protection (BMELV) as one of 2009 bioenergy regions nationwide through a special regional development concept.

Another strategic advantage of the biomethane plant: The industrial and commercial park has a particularly good connection to the transport infrastructure, so that the substrates and digestate can be delivered and removed smoothly. These optimal framework conditions have led to other companies that rely on vegetable input materials being based there: The pulp producer Zellstoff Stendal mainly produces several hundred thousand tons of pulp from tree bark every year. The production waste is converted into energy in the company's own biomass power plant, which is one of the most powerful and efficient of its kind in Germany.

As for comparison, the nuclear power plant ruin is located in the immediate vicinity of the WELTEC plant and the biomass power plant, which represents the conventional past of energy generation like a memorial: the ruins of the Stendal nuclear power plant were to become the GDR's largest nuclear power plant in the 1970s. However, the completion of the Russian-type plant was stopped in March 1991 after the construction costs exceeded seven million German marks (3,58 million euros) per megawatt and serious safety deficiencies were found. The coal-fired power plant in Arneburg that was planned a few years ago was also in danger of decay. The construction project is no longer being pursued after citizens' initiatives have been calling for resistance to the facility for years.

In the biomethane plant in Arneburg, chemical amine washing produces around 700 standard cubic meters of biomethane per hour with a methane content of 99 percent. Plant concepts such as the biomethane refinery in Arneburg, on the other hand, belong to the future, also because they combine securing a sustainable energy supply with positive employment impulses: "The biomethane refinery in Arneburg exemplifies that we have the right answer to the increasing demand for biomethane for the appropriate recycling paths have to give. This future viability is also evidenced by the fact that Nordmethan GmbH in Arneburg creates ten jobs and two training positions, ”says Managing Director Jens Albartus.