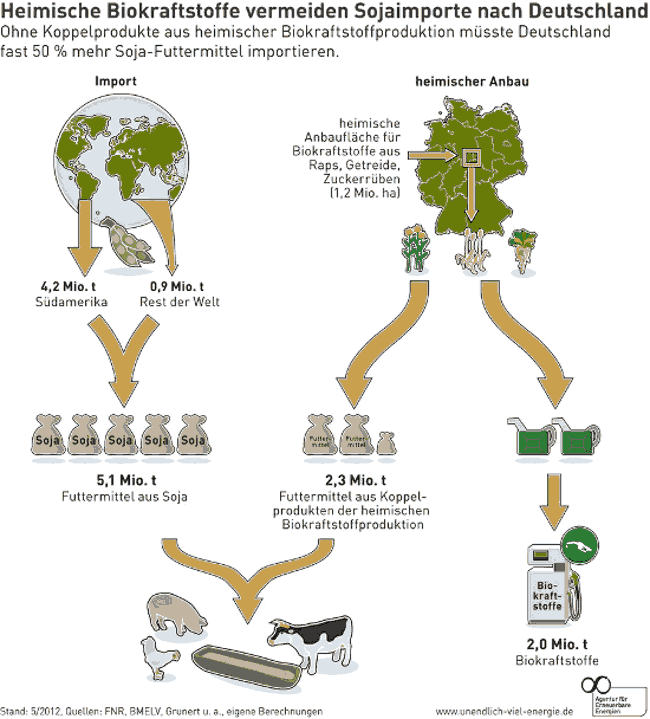 The discussion about "plates, troughs or tanks" in the cultivation and use of arable plants continues. The biofuels industry is trying to provide the necessary moral debate about biofuels to be based more on rational arguments and verifiable facts in order to avoid further loss of image due to premature and emotional conclusions. I would like to take part in this educational work for liquid bioenergy and some comments on the graphic of the Renewable Energy Agency (AEE) complete. The graphic takes a look at the connection between the production of biofuels and the production of animal feed.

Soy combines the production of animal feed and biodiesel

Soy is a very flexible crop and, with a 55 percent market share and an annual market value of EUR 40 billion, it is the most important oilseed worldwide.

The use of soybeans is a good example of the fact that the decision between trough or tank when cultivating arable plants is not as exclusive as the name "tank-OR-plate" suggests. This is because the protein of the soybean plant is mainly contained in the soybean cake, which is also a by-product that can be used in biodiesel production. Since the production of biodiesel primarily targets the oil content of the plant, the proteins that are so important for animal feed are not lost.

As the soybean plant shows, depending on the crops grown, arable land can be used for the parallel production of feed and bioenergy. At around 80 million tpy, soy is even the most traded crop after wheat, almost 150 million tpy, and maize, a good 100 million pound, worldwide.

But what applies to the soybean plant also applies to the rapeseed native to Germany. And as the AEE graphic shows, the German biodiesel production from rapeseed also offers the advantage of a combined feed and biofuel production. The rapeseed cake that is produced as a by-product when the rapeseed oil is pressed in an oil mill can, depending on the oil extraction and the pressing process (cold pressing, hot pressing), be used as animal feed of different quality. This by-product of the oil pressing makes up the dominant proportion of 70 percent (rapeseed) - 80 percent (soy) of the initial mass added to the pressing.

By using the rapeseed cake from oil pressing or biodiesel production, the soy imports for animal feed production from South America can therefore be somewhat balanced and dependency reduced.

Despite the mentioned advantages of biodiesel production, it is currently still in the stars whether biodiesel will continue to play a key role in alternative fuels in Europe after 2017 and 2018. The greatest threat to the biodiesel industry is currently the decision on the topic Indirect Land Use Change (ILUC) and the possible introduction of an ILUC factor. However, the Decision of the EU Commission only recently postponed dealing with indirect land use changes.

Already in 2010 the Biodiesel production in Europe decreased for the first time. Another cause, in addition to the ILUC conflict, is the growing biodiesel imports from Argentina, which in turn have increased because the Generalized System of Preferences (GSP) of the European Commission gives the South American country significant tariff advantages.

We have already seen the effects of subsidizing biofuels on the development of international trade in the negative (from a European perspective) with the rapidly increasing bioethanol imports from the USA during the past 2 years. A renewed strengthening of domestic biofuel production therefore certainly does not have to be interpreted as protectionism.

I also hope that the focus of biomass use will increasingly be on the design of production chains that take into account the manufacture and further processing of by-products and thereby strengthen the material and energetic use of this valuable asset.