Campaign strengthens bioenergy and biomass strategy in the UK

Biomass as a renewable energy source has not been used very intensively in Great Britain for many years. The country has only a small amount of wood reserves of its own and comparatively few forest areas. The "Back Biomass" campaign is now highlighting the benefits of using biomass and, above all, bio-waste to generate bio-energy in the UK. What is the status of biomass cogeneration plants, biogas and biofuels in the UK?

Other articles have already talked about the development of bioenergy among emerging energy giants like India and China reports, who especially appreciate the decentralized availability and applicability of biomass on their large land areas. But what actually happens to our European neighbors regarding the use of bioenergy? This article looks at the state of development of bioenergy for a European heavyweight & #8211; Biomass is staying home.

"Biomass Back" campaign for the use of bioenergy in Great Britain

The Renewable Energy Association (REA) of the United Kingdom announced on August 23, 2011 the start of the "Back Biomass" campaign. With this, the REA would like to draw attention above all to the resulting advantages in the use of bioenergy. On the Campaign website the strengths are mentioned:

The pro arguments for the use of bioenergy do not differ much on the island from those mentioned worldwide Benefits of bioenergy.

The timing of the “Biomass Back” REA campaign is not random, but deliberately chosen. At the end of 2011, important political decisions regarding the use of renewable energies in electricity and heat production will be made. Specifically, it is about setting funding rates for renewable energies between 2013 and 2017. Before the new state framework conditions are established, private investors will not push ahead with any further biomass projects.

It is already clear that state subsidies for bioenergy have been linked to high sustainability standards for bioenergy systems since April 1, 2011. Compared to fossil fuels, the carbon dioxide emissions from the energetic conversion of solid and gaseous biomass must be reduced by 60%! Despite the comparatively tough requirements, these are welcomed by the biomass industry in Great Britain.

Charles Hendry, Minister of the Department of Energy and Climate Change, supports the REA's biomass back campaign. Hendry is convinced that the use of biomass contributes to a balanced energy mix for Great Britain and that an electrical output of 6 GW will be achieved by biomass by 2020. This is also stated in the "UK Renewable Energies Roadmap", which was published in July this year.

What is the level of gaseous, liquid and solid bioenergy in the UK?

Here is a graphic of the use of renewable energies in Great Britain in 2010, which, like the Renewables Roadmap of Department of Energy & Climate Change was issued. 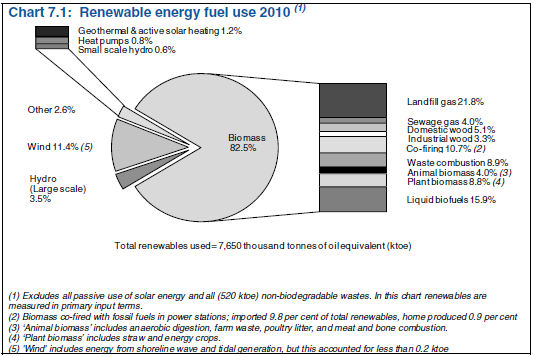 Largest biomass cogeneration plant in the world in England?

England is only covered with forest at 9% and there is a shortage of its own wood, which is used as a classic fuel for biomass cogeneration plants.

Nevertheless, thanks to the new funding conditions for bioenergy, there are numerous plans for new biomass CHP plants in the United Kingdom.

The new biomass power plants of this size (!) Are seldom popular and there are also citizen movements in England against the construction or renovation of biomass power plants. Above all, the sustainability of huge plants like the one in Port Talbot is questioned.

Due to public opposition, the construction of the world's largest biomass cogeneration plant in Port Talbot has not yet started 4 years after regulatory approval. A 350 MW biomass power plant is to be built in the port city, 200 km west of London, for £ 300 million and will be operated with wood chips from Canada and the USA.

On interesting articleThe UK Guardian has published the views of critics of large biomass CHP plants and has been supplemented by many comments.

The largest biomass cogeneration plant in Germany, with 100 MW, is currently in Arneburg and is connected to the pulp mill of Zellstoff Stendal GmbH.

In order to still be able to benefit from the advantages of bioenergy as a renewable energy, the UK is primarily focusing on the further development of gasification technology for biomass. Thanks to the flexible conversion of various biomass energy sources into an energy-rich gas, organic waste can also be integrated into the energy supply ("waste-to-energy"). Biowaste is particularly high in densely populated countries like the UK.

When the first biomass gasification plant called "Project Arable Biomass Renewable Energy" (ARBRE) was opened and closed shortly afterwards 10 years ago, the time had apparently not yet come for this innovative form of bioenergy production. A renaissance of biomass gasification technology in the UK has been observed since early 2011.

Only in early August was the construction of a modern gasification plant with 49 MW approved in an industrial area near Teesside, which uses non-recyclable waste and will provide electricity for 50,000 households.

Biofuels in the UK

Great Britain currently only plays a small role in the production of biofuels. According to a published in June report British Petroleum (BP) on the statistical composition of global energy consumption produced only around 180,000 tonnes of biofuels ("oil equivalents") in Great Britain in 2010. Biodiesel and bioethanol were recorded together. For comparison, it was almost 3 million tons in Germany.

Currently, 3.3 % of the entire UK fuel requirement is covered by biofuels. The majority of the biofuels are imported. The share of biodiesel from Argentine soybeans is growing rapidly. By 2014, the share of biofuels in the UK's fuel consumption is expected to increase to 5 %.

Biogas and biogas plants in the UK

The biogas technology is operated in England under the name "Anaerobic Digestion".

Just as with the use of gasification technology, the primary focus should be on organic residues, of which 100 million tons are generated annually on the island. Fermented in biogas plants could produce 1.7 TWh of electricity.

Between 2007 and 2013, the following 3 funding programs provided well over £ 500 million for the construction of biogas plants:

The increased use of heat in biogas plants, the feeding of biomethane into the natural gas network and the introduction of a feed-in tariff for small biogas plants are also politically strongly promoted by a biogas plan ("Developing and implementation for anaerobic digestion").

A year ago, in August 2010, there were only 40 biogas plants in operation in Great Britain. This number is to be increased to over 1,000 by 2020 through the funding programs mentioned. Viewed as a percentage of the current situation, this corresponds to rapid growth, but is still relatively low compared to the plant situation in Germany (around 7,000 biogas plants at the end of 2011). Further details on the description of the biogas situation in England can be found here.

Finally, the recommendation for the website of the Biomass Energy Centerwhich provides a wealth of information on the state of bioenergy in the UK.