It is clear to me which is the most flexible of all bioenergy carriers: biomethane! No other energy source based on biomass is so diverse in electricity market, Heating market and Fuel market applicable. Although hardly a day goes by when the storable biomethane is not praised for its properties and possible uses, the processed biogas has its initial difficulties in opening up the energy market. The on August 19.08 from the Bundesnetzagentur published 2013 biogas monitoring report offers a fact-based view of the development of the biomethane landscape in Germany.

A big advantage of also under the name Bio natural gas Known energy source is that it can be moved and accessed via the dense natural gas network that has been developed over decades. The transport of bioenergy via this form as pure methane (CH4) is at the same time environmentally friendly and inexpensive, i.e. ecologically and economically efficient.

The President of the Fachverband Biogas e. V., Horst Seide, presents the energy source obtained from the biogas as follows:

"Biomethane is ideally suited to provide system services in the power grid via flexible power generation in cogeneration plants, for example for the Balancing energy market. Biomethane also reaches the natural gas filling station via the gas network and saves greenhouse gases as a renewable fuel in the natural gas car. This protects the climate ”.

The 2013 biogas monitoring report shows that the relative growth of the industry is very positive and that both the number of plants and the amount of biomethane fed in show a growth rate of over 40 percent. Measured on the entire energy market or Number of biogas plants in Germany However, the absolute figures for the biomethane industry are still negligible. 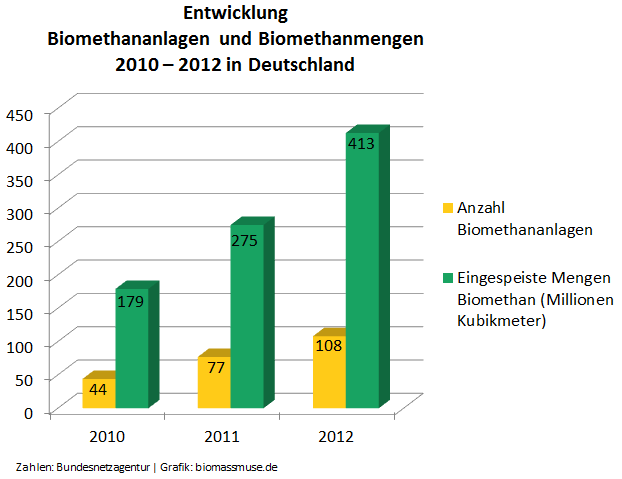 Also related to the inserted Federal government's biomethane target of 6 billion m³ of biomethane fed in by 2020 is only a target achievement of 6,88 percent (Source: BNetzA). But it is only the year 2013!

Fortunately, there are numerous actors who are committed to expanding the biomethane infrastructure. For example, the Initiative natural gas mobility the use of biomethane and sees this as an opportunity to provide the most climate-friendly fossil energy source natural gas with a strong regenerative energy source.

The targeted biomethane initiatives by cities and companies also show that there is great interest in Biogas 2.0. They sit down in the capital Gasag and the BSR for bio natural gas a. And Leipzig goes one step further and sets up its entire natural gas filling station infrastructure Bio natural gas from straw from Verbio AG.

Biomethane undoubtedly represents an important milestone in the Evolution of bioenergy. If one extrapolates the current growth rates of the 2013 biogas monitoring report for the coming years, we can even achieve the ambitious feed-in target of 6 billion cubic meters of biomethane per year by 2020. An annual growth rate of 50 percent would continue as follows:

Despite all the euphoria about the current development, there is also the saying that the low-hanging fruits are picked fastest. So let's keep our fingers crossed and let's ensure that the rise of biomethane continues and that efficient energy sources mature into an important pillar of our energy supply of tomorrow.