Biodiesel is the biofuel which is obtained from oil plants such as rapeseed, soybeans, the oil palm or innovative energy plants such as jatropha and camelina.

Biodiesel was tested for the first time by the namesake of the diesel engine, Rudolf Diesel, at the world exhibition in Paris in 1900. A lot has happened since then. The admixture rate of biodiesel to fossil diesel in Germany is currently a maximum of 7 percent (B7). The bio fuel variant B100 is also available at German petrol stations. The biological origin of renewable diesel also enables the easy biodegradability of the biofuel and makes it very popular as a fuel for shipping.

Below is a selection of articles that have appeared on BiomassMuse over the past few years on this biofuel.

In addition to vegetable oils, biodiesel is the problem child of the biofuels industry and after a rapid increase in production in Germany from 2002 to 2007 and a production level that has remained almost constant, industry experts are currently seeing a first drop in overall production in Europe. However, Germany is currently still the largest biodiesel producer in the world.

Biodiesel has to deal with various conflicts and debates (ILUC, palm oil, hunger), which are currently preventing further growth in the industry. But there is also more positive news that shows a constant improvement in quality and an expansion of the raw material base (innovative energy crops, waste) for the production of the biofuel. 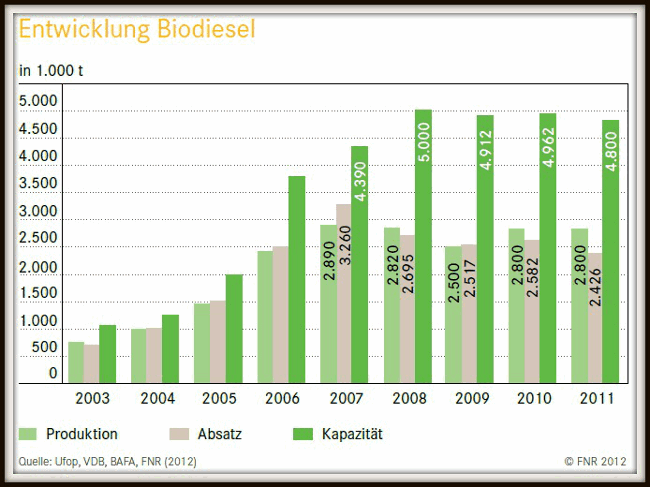 Graphic shows production and consumption of biodiesel in Germany.

The future of biofuels is very uncertain and some important decisions are pending that will have a major impact on the fate of the fuel, at least in Europe.

The ILUC debate on indirect land use changes in energy crop cultivation has been causing manufacturers to struggle for several years and it is feared that the biodiesel carbon footprint calculated when an ILUC factor is included will not be sufficient to meet the 2017 emission reduction targets demanded by the EU (-50 percent CO2 compared to fossil fuels) and 2018 (-60 percent). That could mean the end of regenerative diesel produced in Europe.

On the other hand, there are also some research projects that want to open up larger fields of application for biodiesel with air traffic or shipping and could thus secure the future of biofuels.

Further articles on current developments in the biodiesel industry can be found in the Biofuels section of the blog. The comprehensive article is also recommended Biodiesel at the German Wikipedia.

If you would like to take part in the biofuel debate, write one Guest article on BiomassMuse or in a first step subscribe to the free monthly BiomassMuse newsletter, Many thanks.