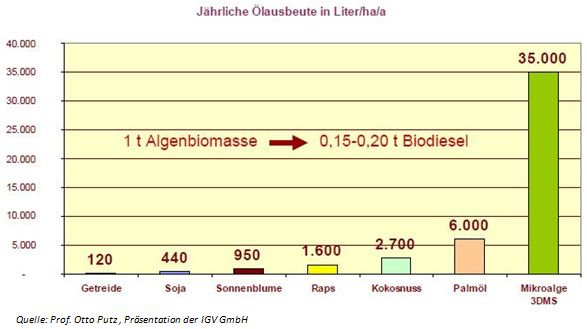 Not all, but most biofuels have significantly better CO2-Balance than their petroleum-based fossil counterparts. This improvement in emission values ​​across the entire production and use chain applies above all to the 2nd and 3rd generation of biofuels. Third generation fuels currently include all types of algae fuels. The intensive use in everyday life still requires a lot of research and before we can buy fuel from aquaculture at the petrol station, for example, it will probably take a few more years. Civil aviation is already preparing to use such fuels as a substitute for kerosene, and is striving to improve the ecological balance of aviation, which is often criticized in this regard.

Biofuels from algae and jatropha at Boeing and Lufthansa

The aircraft manufacturer Boeing has been investing in the further development of biofuels for several years in order to reduce the often criticized "ecological backpack" (life cycle assessment) of long-haul flights. The use of microalgae is obvious at this point, as the fatty acids (oils) of the water organisms converted into biodiesel which is very close to kerosene in its properties. According to Boeing, there is no need to make any changes to the aircraft turbine.

If aviation is also included in the Emission Trading Scheme (ETS) in January 2012, i.e. EU emissions trading, biofuels will continue to gain importance in civil aviation (see Article on biofuels and ETS).

Deutsche Lufthansa AG also entered into a partnership last week in which Neste Oil will supply Lufthansa with the biofuel NExBTL. Contrary to Boeing's plans, this is a second-generation biofuel that is made from jatropha oil and will improve the airline's eco-balance. The Kenyan government also relies on biodiesel from jatropha oil (see article).

Further information on the development of biofuels in aviation can be found in the exciting article (LINK) “When the alga learned to fly” by the journalist Fabian von Poser.

Biomass from land or from water?

But in my opinion neither land nor aquatic plants are generally better suited for economic use and depending on the particular location, the cultivation of arable or aquaculture has corresponding advantages.

The growth rates of algae (see graphic above) are very impressive and exceed traditional field plants many times over, but land plants offer more options for combining material and energy use due to their more complex composition. Perhaps the long-term global developments lead to the fact that arable plants are mainly used as material and as food and that algae primarily provide bioenergy. But this is speculation about long-term trends and can vary widely from region to region.

Advantages of biofuels from algae and production facilities in Germany

As far as I know, the current state of production of 2nd and 3rd generation biofuels is mainly in the area of ​​numerous demonstration, some beta and very few industrial plants worldwide.

In Germany there are some larger projects for growing algae, which I have summarized in the following list. The goals of the plants are mostly a combination of the production of a bioenergetic product and the support of climate protection. The projects are not researched in depth, but rather the list is intended to give a small overview of existing projects. Perhaps there are participants in the projects and give a short insight into the current status of plant operation in a comment.

According to Prof. Steinberg, this is Europe's largest algae farm. Microalgae are cultivated in a 1,2 hectare greenhouse with a 500 km long glass tube system. The algae are mainly used for the production of food and nutritional supplements.

In the pilot plant on a 1.000 m2 Photobioreactor area 6.000 kg of algae dry matter / year obtained. An important effect is the CO2-Binding by the algae, which should contribute to climate protection. The production of bio-fuel is supported by RWE Power AG, Jacobs University Bremen, Forschungszentrum Jülich and Phytolutions GmbH.

Similar to the RWE project in Niederaussem, Vattenfall Europe Mining & Generation and the Gesellschaft für Montan und Bautechnik (GMB) operate an algae farm in Senftenberg. Here, the flue gases (especially carbon dioxide) from the local thermal power station are used to cultivate microalgae. The high CO2-The needs of the microalgae and the stored carbon dioxide of a possible CCS plant could be combined in the medium term. Here you will find an article (Addendum from 12.09.2011/XNUMX/XNUMX) to the algae cluster in Berlin-Brandenburg for the further development of bioenergy from algae.

The city of Hamburg and E.ON Hanse AG also operate a plant in which the goal is the cultivation of microalgae and the conversion of carbon dioxide to biomass. For the extraction of one kilogram of algae biomass (dry matter ?!), the project participants are given around 2 kilograms of CO2 recorded.

If you know of any other plants in which microalgae are cultivated in Germany or internationally, please refer to them in a comment!

A list of the advantages of algae cultivation and a collection of companies and institutes that are active in the algae industry, here. 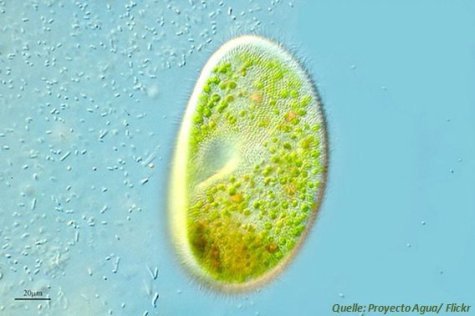 One of the stars among the microalgae is surely the freshwater algae Chlorella vulgaris. It was used by the biochemist and Nobel laureate Melvin Calvin to research the dark reaction of photosynthesis. The green alga is also a better understanding of the Calvin cycle named after M. Calvin Chlorella Thanks to.

The high protein content of Chlorella vulgaris between 50 - 60% also means that the microalgae is also very interesting for the development of food or material applications.

When I wrote my diploma thesis on the modeling of algal biocenoses a few years ago and in the dataset among other things Chlorella occurred, I was not even aware of the great importance of the small organism for science. That is why I am all the more pleased that I was already in contact with this organism in the name of science.

Finally, a few critical words. I hope that the research into algae takes place carefully and that moderate use can be achieved, because the fascination for these growth giants also means great economic temptation. Algae are the oldest living form on earth and the effects of an impact on their ecosystems can hardly be overestimated.